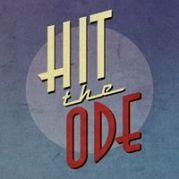 Hit the Ode, for those of you that don’t know about it after 7 years on the Birmingham scene, is a monthly poetry event hosted by Apples & Snakes. It runs out of the Victoria pub behind the Alex Theatre and open mics share the stage with 3 headline acts; 1 Midland poet, 1 national poet and 1 international poet.

Olivia Bergdahl’s poetry has been described as sensual, innovative but rooted in literary tradition, very funny, and underpinned with a strong sense of rhythm and melody. That came across strongly last night as she mixed politics with an investigation into normalness and rounded off her set with a disembowelment of the Male Artist. I would have loved to hear more in her native tongue as she teased the audience with a beautifully lyrical and musical snippet, which was way too short but nonetheless beautiful.

Rachel Long is a poet, curator and facilitator, currently working on her first collection. She admitted fairly early on in her set an obsession with poems about the body and sex and although she didn’t swamp us with that topic, there was a strong undercurrent of both throughout her performance. She delivered some tellingly beautiful poems about relationships, inspired from many sources, not least David Lynch the film director. Surreal and delightful would be an apt description of her work

I feel like I have been stalking Luke Kennard this week having seen him in Leicester only the day before yesterday at Find The Right Words (another Apples & Snakes sponsored event). Luke is one of the most influential poets of his generation, his work combining complexity and humour to great effect. He again delivered a set combining the absurd, the moving, and the funny, mostly reading from his book Cain. However, I particularly enjoyed his parody of writing a commission for the advertisers of financial institutions – priceless comedic verse.

All in all a very enjoyable night.

Bohdan Piasecki officially announced his move from his current role at Apples & Snakes at last night’s gig. He will probably host the last Hit The Ode next month, before it’s traditional Summer break, so it will be worth getting along to that one just to say goodbye. But he is not moving far away from poetry and the arts, starting with BeatFreeks (based in Birmingham) shortly. We wish him well…